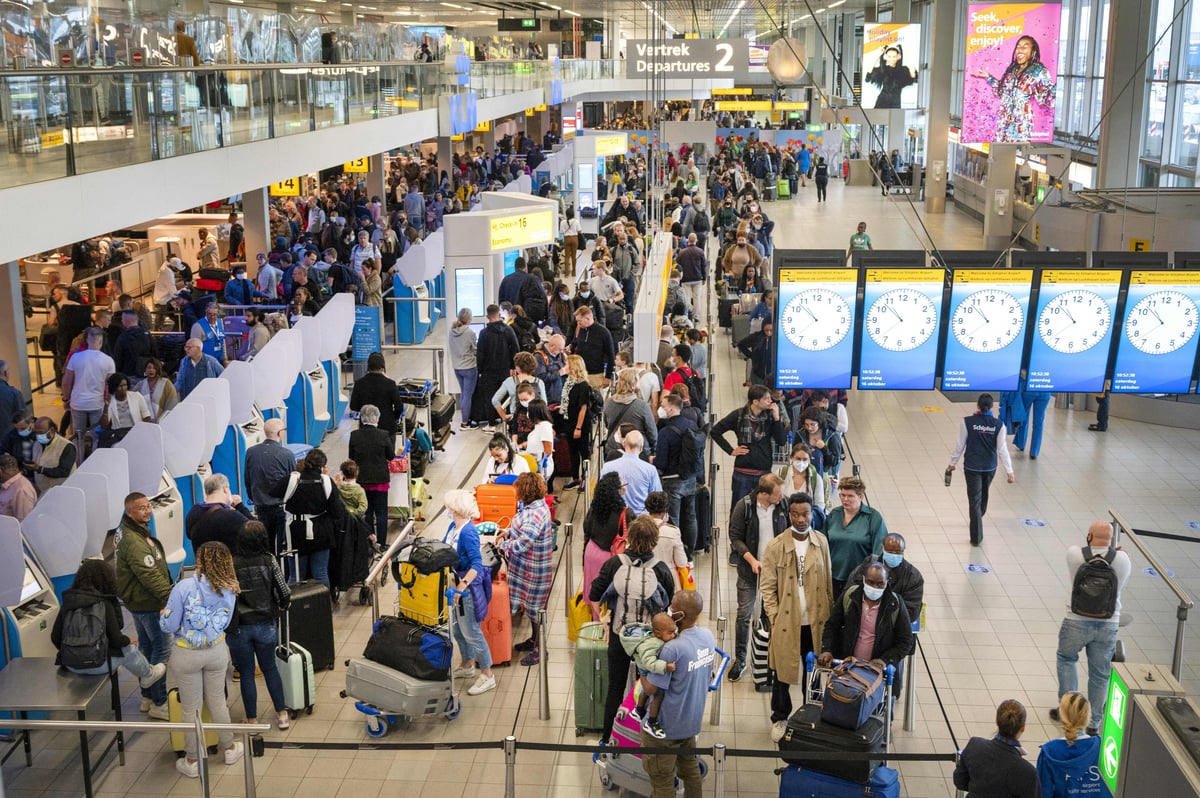 EasyJet, British Airways and Tui have all reported connections with long queues of more than four hours at major airports

EasyJet, British Airways and Tui all suspended services as the school holidays started for many children across the UK.

Register to our travel guide newsletter

Large queues have been reported at Gatwick, Manchester and Bristol airports, with some waiting longer than four hours.

Transport Secretary Grant Shapps said one of the reasons for the chaos was that airlines and operators had “severely oversold flights and holidays” relative to their delivery capacity.

Around 240 easyJet departures have been grounded over the past two days with last minute cancellations as of Monday morning (30 May).

Meanwhile, British Airways continues to cancel more than 100 flights a day as part of the planned reduction in services.

Why are flights cancelled?

A number of issues are currently emerging, including staffing issues, IT disruptions, runway work and air traffic restrictions.

Staffing issues due to Covid have seen airports and airlines scramble to hire new staff, but the process is now more complicated due to security concerns.

Many workers have been laid off or changed jobs during the pandemic.

Before Covid, airports and airlines across the UK employed around 140,000 people, but thousands of jobs have been cut since then.

Around 30,000 jobs were lost at British airlines alone.

They have to go through anti-terror checks by the government before they can start work, which has taken longer than usual thanks to the overwhelming number of staff hired.

Aviation Secretary Robert Courts announced last month that it would relax the screening process to ease the pressure and allow airports and airlines to train staff before screening is complete.

The Manchester Airport operator said more than 500 people are undergoing background checks and security training, but only 200 are due to join this month.

There is also still a large number of people catching Covid with many staff calling in sick and causing chaos in the schedules.

Airlines UK said the sector had “only a matter of weeks to recover and prepare for one of the busiest summers we have seen in many years”.

Even so, “the vast majority” of flights this week would operate as planned.

What did the transport minister say?

Grant Shapps said it had been “very disturbing” to see people at airports facing more disruption.

He said the government had been clear it was up to industry leaders to address travel disruptions and he would be meeting with airports, airlines and ground handlers to “find out what went wrong and how they plan to manage the current spate of cancellations.” terminate and delays”.

He added: “Despite government warnings, operators have grossly oversold flights and holidays relative to their delivery capacity.

But Paul Charles, chief executive of travel consultancy The PC Agency and a former director of Virgin Atlantic, said the government itself was “responsible for this mess”.

He told the BBC: “[The transport secretary] has a bit of nerve I’m afraid.

“It is because of the government restrictions that have changed so much during the pandemic and the shutdown of the industry with the Omicron variant last December that created this problem.”

Why are airports so crowded?

This year, many passengers are traveling abroad for the first time in two years as the Covid pandemic causes long queues at airports and congestion on the roads.

Large queues formed at the Port of Dover for travelers waiting to cross the English Channel.

Airport officials have said many passengers are using vouchers or credit from trips canceled during Covid, spurring demand.

This week also marks the first school holidays in England and Wales since the UK lifted all Covid travel restrictions and eased coronavirus testing requirements for many EU countries.

Many consumers saved money by being unable to holiday during lockdown, leading to pent-up demand for overseas travel.

Which airlines have canceled flights and why?

On Friday (May 27), the airline announced that it would suspend another 240 flights by June 6.

There were also some unscheduled outages on Monday (May 30) and Tuesday (May 31).

Passengers due to travel from Gatwick to Seville and Rome were given just an hour’s notice.

The airline said this was due to restrictions imposed by air traffic control on Sunday.

Tui passengers also experienced cancellations and delays over the weekend, albeit to a lesser extent.

Dozens of services were either canceled or postponed between Friday and Sunday.

The airline said in a statement: “While flight delays and cancellations are rare with us, the sudden increase in leisure travelers combined with various operational and supply chain issues has unfortunately resulted in a small number of our flights being impacted. ”

Where is the disorder worst?

Gatwick has recorded the most easyJet cancellations, followed by Manchester.

Hour-long queues have been pictured at both Gatwick and Bristol, with Twitter users reporting waits of up to five hours at London Airport.

Eurostar services from London St Pancras station also resulted in slow queues outside the station over the weekend.

What rights do I have if my flight is canceled or delayed?

If your flight is canceled or delayed by a certain amount of time, you should be entitled to compensation.

If your flight is cancelled, you have the right to choose between a refund or a re-routing – this can be a new flight on the same airline or a different airline.

The airline should give you the opportunity to get to your destination on the same day.

If you cancel within 14 days of departure, you can claim compensation.

How much depends on the type of flight, whether you choose to take a refund and not travel, or how much later your new departure and arrival is than your original plan.

If an airline cancels at the last minute and you are forced to buy a new flight on a competing airline, you can claim the cost of the replacement ticket.

You are not entitled to delays of less than two hours.

After that, you get paid for food and drink (probably in the form of vouchers to be redeemed at the airport) and phone calls for a short-haul flight under 1,500 km.

You are also entitled to accommodation and transport.

Compensation applies after three hours and starts at £220.

If the delay is more than five hours, you can get a full refund if you don’t travel, or possibly compensation even if you get the later flight, depending on the reason for the delay.

https://www.nationalworld.com/lifestyle/travel/why-are-flights-being-cancelled-uk-airports-so-busy-3715623 Why are flights being canceled – and UK airports so crowded?

What we keep wrong about rights

While most Americans say talking about racism and slavery is good for society, survey reveals deep divides