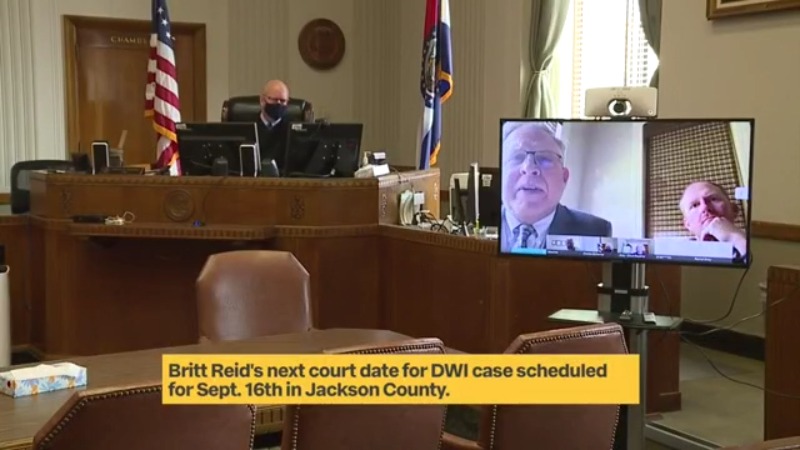 A judge wants to schedule Reid’s trial for drunk driving.

Reid was the driver who crashed into two other vehicles outside Arrowhead Stadium, seriously injuring a 5-year-old girl.

In court on Thursday, Reid’s attorney, JR Hobbs, said additional investigation remains to be completed, including the possibility of expert witnesses in the case.

Court documents show Reid had a blood alcohol level of 0.113 after the collision.

Police determined that Reid was driving 82 miles an hour in a 65 mile an hour zone five seconds before the crash happened.

According to a police report, a driver on the ramp heading south to I-435 from Stadium Drive ran out of fuel and called for help.

A family in an SUV showed up to help.

Reid told police he was trying to get onto the highway and was looking over his left shoulder when he hit the SUV.

Reid also told police he had two or three glasses of alcohol and was prescribed Adderall, a stimulant that helps people focus or pay attention.

Britt Reid no longer works for the Kansas City Sheriffs.

He is expected to return to court on September 16.

A Go Fund Me page for the injured girl has raised more than $500,000 towards her medical expenses.

https://fox4kc.com/news/no-trial-date-yet-for-britt-reid-his-attorney-says-case-investigation-not-complete/ | No trial date yet for Britt Reid, his attorney says case investigation not complete

FTC takes on 'Right to Repair' as an antitrust issue