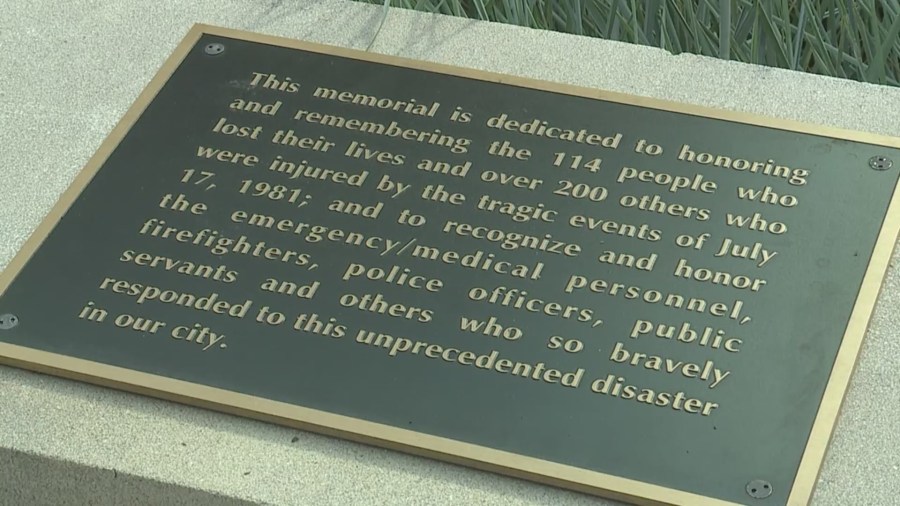 KANSAS CITY, Mo. – Forty years ago, crime scene video and chaos were the scene at a hotel in Kansas City, Missouri.

Paul Botnem, who lost his father, said: “I would give anything to get my dad back, even if it’s just for five minutes.”

Years later, the pain is still the same.

“I think about my dad very often, almost every day,” says Botnem.

Saturday was the first time Paul saw his father’s name, Henry, on the Skywalk Memorial after he was killed.

Botnem said: “It was overwhelming, but it was nice to see those who lost their lives being commemorated.

A beautiful evening of laughter and dancing turned disaster and tragedy on July 1, 1981.

Forty years later, dozens of people have gathered at the Skywalk Memorial to reflect on the lives lost, injured and those who helped.

“When I got to the Hyatt scene, nothing in my academy training could have prepared me or other first responders for what we witnessed that night,” said Vince Ortega Former Kansas City police officer.

Ortega said he was the first to respond that day.

He says bad things like the incident are good things from it.

“This event is a case study,” Ortega said. “Not only on a regional scale but also on a national scale for disaster prevention to cross legal boundaries involving multiple emergencies and rules.”

With tears in his eyes, Botnem said there are conversations and memories he will never be able to share with his father again.

“His wisdom, his knowledge and his laughter,” said Botnem. “You know, all the things I didn’t get a chance to learn from him.”

Mayank Agarwal , ‘we just want to ease into things’

Duke’s Michael Savarino, grandson of Coach K, had to take a break after DWI’s arrest