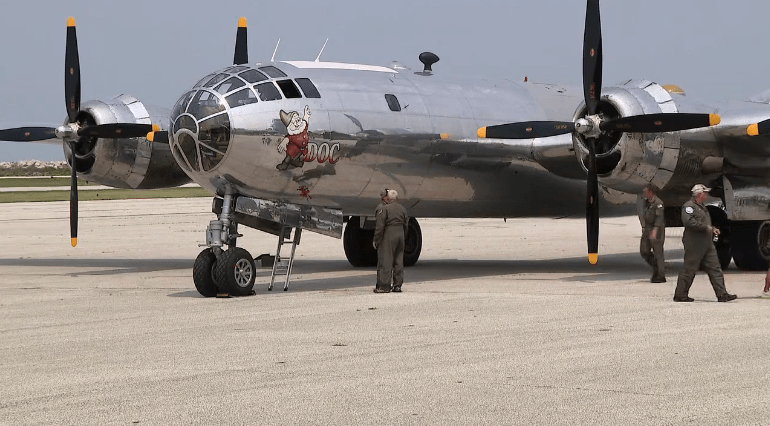 B-29 Doc, one of only two B-29 Superfortresses still in service and flying today, landed at Burke Lakefront
Airport just before 2pm

Present to greet the plane were 102-year-old World War II veteran Owen Hughes, who drew the nose art of the plane, and Tony Mazzolini, a Cleveland native, who saved Doc from the Mojave Desert in California so it could have a look. can be restored more than 20 years ago. , along with members of the Legion Riders.

Cleveland marks the 4th stop for the B-29 Document Historic Restoration Tour in July that includes visits to a total of seven cities across five states.

Tony Mazzolini said: “When I first saw this B-29 as a missile target on the bombing range of Naval Weapons Station Lake China in the 1980s, I never imagined I would be able to. share its glory with his homeland.” “It is an honor to welcome this majestic warbird to Cleveland and to give everyone a close-up and personal look at the aircraft that has meant so much to me and many others throughout their lives. its.”

Tony, who served as a flight engineer on multi-engine aircraft during the Korean War, will reunite with friend and colleague Owen Hughes.

Josh Wells, general manager and chief executive officer, said: “Bringing Doc back to Cleveland honors Tony’s work in rescuing this warbird from being destroyed by the navy as a missile and sighting target for the Navy. him to restore it to flight is a great honor for our crew.” for B-29 Doc. “And being able to celebrate Owen’s World War II service to our country is our true mission. Today, Doc serves as a memorial and flying museum to the Greatest Generation, along with the people who designed, built, and flew these planes to defend freedom, as well as those who who continue to defend our homeland at home and abroad. “