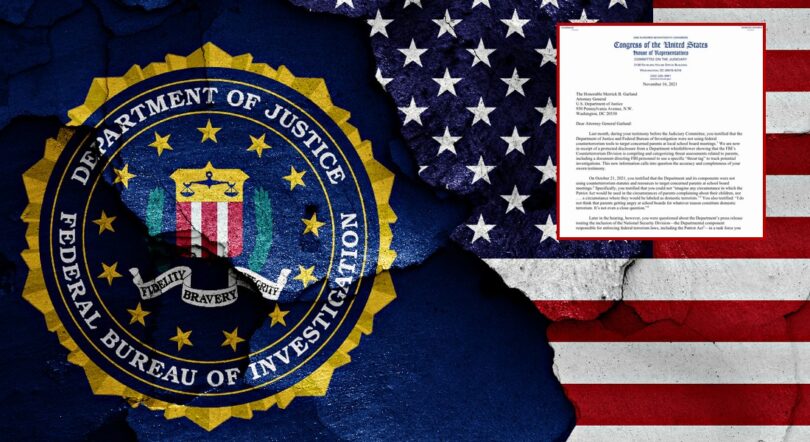 The Federal Bureau of Investigation has been completely exposed as a weaponized political tool of radical Democrats. The FBI’s counterterrorism tactics against US parents concerned about the de-ethicalization of their public schools have just been revealed – and they’re disturbing indeed.

A “whistleblower” has asked for the document to be made available to the public through the House Judiciary Committee. The documents reveal that the Attorney General ostensibly committed perjury before Congress — a pattern among Biden administration officials not unique to Merrick Garland.

A letter from the House Judiciary Committee to Attorney General Merrick Garland signed by Ranked Member Representative Jim Jordan (R-OH) is chilling as it reveals the FBI’s activities against the US parents.

“Last month, in your testimony before the Judiciary Committee, you testified that the Justice Department and the Federal Bureau of Investigation did not use federal counterterrorism tools to target the parents involved. involved at local school board meetings,” the letter read.

“We are currently receiving a protected disclosure from a Department whistleblower indicating that the FBI’s Counterterrorism Division is compiling and categorizing threat assessments involving parents, including a document instructing FBI personnel to use a specific ‘threat tag’ to track potential investigations,” the letter added. “This new information raises questions about the accuracy and completeness of your sworn testimony.”

“On October 21, 2021, you testified that the Department and its components did not use counterterrorism regulations and resources to target the parents involved at meetings of the school board,” the letter continued. “Specifically, you testified that you cannot imagine any case where the Patriot Act would be used in the case of parents complaining about their children, nor… a case. they will be branded as domestic terrorists.”

“You also testify: ‘I don’t think parents being angry with the school board for any reason constitutes domestic terrorism. It’s not even a close question’. “

“However, later in the hearing, you were asked about the Department’s press release introducing the inclusion of the National Security Division — the part of the Department responsible for enforcing federal counterterrorism laws, including include the Patriot Act — in a task force you’ve created to ‘address the problem of increased criminal behavior towards school staff’. ” You seemed surprised to learn about the National Security Committee’s involvement in the task force, but you avoided answering the question directly and did not provide a clear explanation of the Security Committee’s role. National in the task force.”

In October, Attorney General Merrick Garland was asked to explain to Congress about the Justice Department’s capture of a National Association of School Boards memo alleging concerns about ‘crisis’. domestic publication’ is likely to be done by the parents involved.

“You said a while ago that you can’t imagine a parent being labeled a ‘domestic terrorist,'” Rep. Louis Gohmert said. at the hearing. “But parents around the country believe that it is exactly what you labeled them in your memo indicating that you will participate in board meetings, board meetings. schools, because of the threat of domestic terrorism”.

“So if you can’t imagine a parent being labeled a ‘domestic terrorist,’ I would encourage you to rework your memo so it doesn’t come across as so threatening that others worried about their children’s education,” he added.

Senator Ted Cruz also garland is evaluated for not being able to substantiate the claims alleged in the NSBA letter. Even when the attorney general was raving about the issue, he gave sly answers and often dodged the issue. The whistleblower’s new report to the House Judiciary Committee explains why.

“We have received no disclosure from a Department whistleblower who is asking to question the accuracy and completeness of your testimony,” the letter continued. “The whistleblower provided an FBI email dated October 20 — the day before your testimony — and sent it ‘on behalf of’ to the ‘FBI Assistant Director for Terrorism Prevention and the Assistant Director of Criminal Division. .’

“The email, attached, refers to your October 4 directive to the FBI to address threats from the school board and notifies FBI personnel of a new ‘threat tag’ issued by the Defense Department. Terrorism and Crime,” the letter read. “The email instructed FBI staff to apply this new threat tag to all ‘investigations and assessments of threats specifically aimed at management’ school badges, board members, teachers and staff’.”

“The email states the purpose is ‘scope[ing] This threat is at the national level and[ing] an opportunity for a comprehensive threat picture analysis for effective engagement with law enforcement partners at all levels,” the letter reads.

“This disclosure provides concrete evidence that federal law enforcement operated counterterrorism tools at the behest of a left-wing special interest group against the parents involved, ‘ the letter continued. “We know from public reporting that the National Association of School Boards coordinated with the White House prior to sending a letter dated September 29 to President Biden accusing parents of terrorists. in the country and urged the Justice Department to use federal tools — including the Patriot Act — to target parents. Just five days later, on October 4, you issued a memo directing the FBI and other parts of the Department to address the ‘disturbing increase in harassment, intimidation and threats of violence’. at school board meetings’. “

“As the whistleblower’s disclosures indicate, the FBI’s Counter-Terrorism Division promptly carried out your instructions,” the letter added. “The actions of the FBI are entirely foreseeable — and perhaps expected — the outcome of your October 4 memo.”

The House Judiciary Committee letter invited the Attorney General to “modify your testimony that the Department or any component of it has used or is using counterterrorism resources or tools for the purpose of investigate, monitor, or prosecute threats related to school board meetings. The letter then asks the Department of Justice to comply with backlog requests for information to independently verify serious allegations, as well as warning about retaliation against whistleblowers. It can be read in full below:

This week, the news broke most Americans that the NSBA actually colluded with the White House, even though Becker News report in early October. Fox News report:

Viola Garcia, the NSBA president that the Ministry of Education later named for a federal assembly, sent a Remember board to NSBA members on October 11 (but October 12), providing a schedule of NSBA’s interactions with the White House prior to the letter to Biden that the NSBA sent on September 29.

Five days later, on October 4, the DOJ issued a memo directing law enforcement to investigate threats to school boards. On October 22, NSBA released an apology for the letter.

The whistleblower’s disclosure of the Biden administration weaponizing a phishing letter – one originally headed by the White House – to free up counterterrorism resources against the parents involved was a chilling revelation. The political consequences of this betrayal of public trust will certainly be felt for generations to come.

Surprise: Kevin McCarthy is about to let Paul Gosar go with a video depicting the AOC's murder

Tensions flared in Kenosha as protesters began to gather

Travel interruption: At the latest in the case of canceled flights and rail strikes