Our Tower of Zot guide is here to help those of you who pre-ordered Final Fantasy XIV: Endwalker and is currently playing through early access. And, judging by the queues and occasional servers, that’s most of you. Therefore! With Endwalker we have tons of dungeons and new challenges, but this level 81 love letter to Final Fantasy IV is the first one you will fight…after fighting with several hours of cutscenes and dialogue.

I’ll try to keep these guides relatively spoiler-free as we go, but it’s clearly not the easiest thing to do. In this guide at the very least, you’ll read about dungeon names, bosses (and their attacks), and see a bunch of screenshots. No more no less.

And that’s probably for the best, because there’s quite a bit more to talk about. While the Tower of Zot is the first dungeon and it looks like it has been tweaked a bit since press event, it’s still a vicious introduction to Endwalker. Expect a death or two if you’re coming first with Tower newcomers, and don’t reduce your chances of being wiped out. At least you’ve got Golbez, Clad In Dark play while you go on, huh? 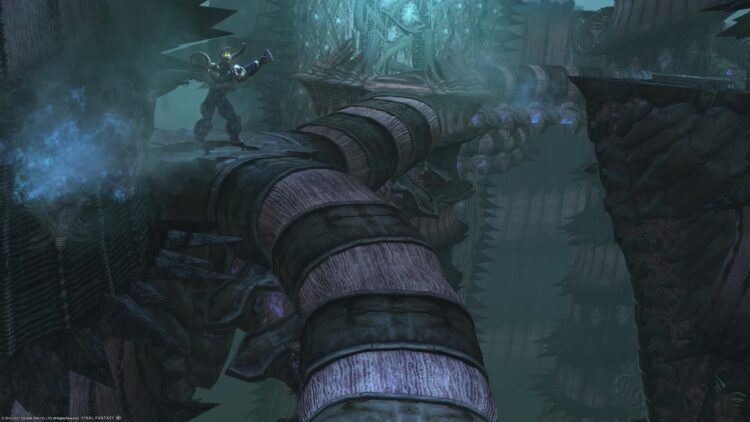 Manusya Bio – Tankbuster poison. Relieve as needed and Esuna removes the poison.
Manusya Blizzard III – Seasonal AoE emanating from Minduruva.
Manusya Fire III – Donut-shaped AoE attacks the entire arena except Minduruva’s melee range. Stand close to her to avoid.
Manusya Thunder III – Many AoEs go in major directions from Minduruva. Stand at a diagonal to avoid, or just run away from a diagonal and turn back as it passes.
Manusya Bio III – AoE hits the entire arena to one side of Minduruva.
Transmute – This can be any of her tier III spells. Whatever it is: Minduruva will create an orb that will slowly move to the marker. When it reaches that marker, the spell in question will turn off. Remember which one she cast and how to avoid it. For example, if she uses Transmute Manusya Fire III, be prepared to stand inside the marker. If you need a reminder her summoner spells will show which orbs are which spells and how long until they activate.
Manusya Fire – Attacking a target will attack a random party member. Probably random, anyway. It often seems to be the healer.
Dhrupad – Minduruva hits everyone but tanks, one by one (with Snowstorm, Fire and Thunder) and deal damage over time debuff cannot be dispelled. Basically, a party-wide healing or shield effect is expected.

Summoner spells indicate that the orb that fires for one second is Lightning, while the orb that’s released for five seconds is Fire. That’s why I’m standing where I’m standing.

If you have played Final Fantasy IV (and pay attention to Endwalker cutscenes up to this point) you already know the bosses here will be the Magus Sisters. And, like in every other series appearance, they don’t sag at all – not even one by one.

Minduruva is a rough hooded figure, requiring the team to pay attention to what she’s recruiting and when. The healer needs to be on tiptoe to keep everyone alive when the Dhrupad spawns, at least if everyone is messing around and entering the AoE. Which they would if this was a blind attempt.

Looking at the attacks, Mindy doesn’t seem all that bad. The point is that after a brief grace period to show you attacks, she will begin to string them together in three: two Transmute and one that she casts herself. This means you’ll have to dodge three huge AoEs, with very little visual cinematic.

The simplest trick? Pay attention to the Fire III and Bio III embryos and prepare for them. Her Thunder III and Blizzard III spells are both relatively easy to avoid: Thunder is multiple AoEs in a row, so as long as you don’t stand on her (or marker) when it flies out, you should be fine. Likewise, you’re pretty frugal from Blizzard, especially at medium distances. But for Fire and Bio, you want to try to stay as close as possible to where they’re coming from so you have enough time to move into the donut or move to whichever side Bio doesn’t hit.

And remember you can check out her strengths to see which Transmute orbs are currently flying out. It’s a handy little trick in case you forget when she sent it, as there doesn’t seem to be any visual markings on the orbs themselves.

Isitva Siddhi – Blockbuster. Mitigate as needed.
Prapti Siddhi – Sanduruva targets AoE at each party member, one by one. Move out of the way.
Manusya Berserk – Sanduruva summons five orbs that will explode into a giant AoE. Move to the side without the orb and press against the wall. Getting hit by these will force the player to melee Sanduruva, which is bad, because…
Prakamya Siddhi – Sandy’s next attack after Berserk is an AoE that doesn’t count. Move out of the way to avoid, assuming you’re not Berserk.
Manusya Stop – All players will be frozen in place and unable to act at different times. Those times coincided with Sandy aiming a Prapti Siddhi at them, so mostly just heal through it and don’t stand in AoE if they’re not aiming for you.
Manusya is confused – Sanduruva will create Berserk Orbs around the room just like her. The “real” Sandy is someone who doesn’t make you uncomfortable. If you have any damage over time effects on her, the real one is the one hit by them. As with Manusya Berserk, find the real Sandy and then stand against the wall closest to her. She is also the one who will start casting Explosive force, but once she starts doing it, you really don’t have time to approach her.

There is very, very little space to avoid AoE from the orbs.

After Minduruva, Sanduruva honestly said Endwalker dungeon. She’s heavily focused on tricks, and once you know how those tricks work you’re not really in danger.

The only two attacks that are likely to get you off the hook are Berserk and Confuse. Berserk AoE spheres are big, so make sure you’re standing straight up against the wall farthest away from them. The same goes for Confuse, but in that case you have to find the exact Sandy… but it’s pretty obvious actually. Look for someone who is standing still instead of dancing or waving at you.

Over there? Hit her in the face and heal through the inevitable Stop attacks, and she’ll go down.

Reincarnation – AoE cannot be avoided.
Summon two others – No name, but after Rapid Reincarnation, Cindy will summon the other two to fight with her.
Manusya Reflect / Manusya Faith / Delta Attack – About a billion AoE is happening everywhere. Circles, lines, donuts, targeted: works. Let’s take a quick look at them…
Flame Insatiable – When the Mage Sisters shouted “Fire mad, destroy our enemies”, this was the attack they were using. It opens with a donut AoE in the center of the arena, and then giant AoEs across the arena afterwards. After a few of those, there will be another donut AoE (usually with a focus on Mindy), and everyone will be targeted with an AoE. For that last part, get inside the donut and then separate as soon as it comes apart so you guys don’t hurt each other.
Glacial Ice – “Ice, let’s crush our enemies,” for this. Distance-damaging AoEs (one of the less damaging AoEs when you’re far away) starts this, along with each Sister launching a conal ice AoE, just like with Blizzard III during the Mandy war. Just before the first meteor hits, there will also be track AoE lines across the arena. Then it repeats, but this time you need to run to the other end of the arena while dodging brute attacks and straight line AoE.
Fierce storm – “Fighting storm, let’s kill our enemies,” for the final style. For this one, you’ve got thick AoEs, plus larger versions of the Manusya Thunder III effect: the large circle AoE, and then the smaller circular AoE that splits away from them in the major directions. The problem is that there will be a lot of this happening at once. This ends up with AoE stacking on a random party member, so try to stick a little bit together.
Most of what they did before – Yes really. Although generally in lesser numbers, until you kill Cindy. While all three are alive, you mostly only have to worry about Mindy’s Dhrupad, Sandy’s Prapti Siddhi, and her Istiva Siddhi.

I didn’t exaggerate about AoE.

Step one is “scream”. Step two is “kill Cinduruva first.” While it might be tempting to get rid of Minduruva first to stop the Dhrupad and all that nasty stuff, Cindy is a healer for three and will resurrect any of her sisters. So again: kill Cinduruva first. Then you can go for anyone; Mindy is a good second choice, as all Sandy really does is throw out blockbusters and quirky Berserk. It doesn’t matter, though. If you can take down Cindy and you’re all still alive, the fight is basically won because the others really don’t have much health left and you’ve eliminated the terror of the Delta Attack.

Besides, the only real strategy is “avoiding the AoEs”, and that really isn’t a strategy at all. Alas, that is both the hardest part of the war and the key to survival. Healers in particular need to be clear about this and should generally prioritize their own safety if they have to. While other players dying is not a necessity, you can usually raise a tank and keep most people alive while that’s happening, assuming you’re not in the middle of AoE hell . I’ll quickly note that in Trusts, Delta Attacks seem to go in the order of Flame/Ice/Thunder, but it changes when you’re with the player.

And with that, the battle against the Magus Sister came to an end, as did the Tower of Zot’s guidance. But stay tuned: we’ll have more Endwalker guide you before long.