Jobs continue to swing back and forth as different COVID waves spur lockdowns and reopenings. Hopefully we’re on the cusp of final reopening. Services account for all revenues. Hospitality jobs were the fastest growing industry, adding 101,000 positions as expected, but they are still far below pre-virus levels. Restrictions are expected to continue to ease throughout the summer, which should mean more solid gains over the next few months. Other sectors with growth from the reopening are retail/wholesale (+78,000), education (+26,000) and healthcare (+20,500). Commodities all fell across the board, with losses focused on construction (-23,000) and manufacturing (-12,000).

Much of the increase has been in sectors exposed to the pandemic, such as retail, food and accommodation, which have been most affected by the new containment measures. Employment in accommodation and food services increased by 101,000. The retail sector added 75,000 jobs.

Rising vaccination rates and falling COVID-19 cases have allowed the country to finally reopen restaurants, bars and retail stores after months of closures. Ontario began allowing patio dining earlier this month, and several cities in Quebec have relaxed restrictions even further, allowing indoor dining for the first time this year.

With June’s increase, Canada recovered 2.65 million of the 3 million jobs lost at the height of last year’s pandemic. The country created 263,900 part-time jobs, of which full-time employment fell by 33,200.

Job growth in June was purely part-time and concentrated among youth aged 15 to 24, mostly young women. The highest increases were in accommodation and food services and retail trade, consistent with the lifting or easing of public health restrictions affecting these industries in late May and early June in many jurisdictions.

The number of employed people working less than half their normal hours fell by 276,000 people (-19.3%) in June. Total working hours were little changed and 4% below pre-pandemic levels.

Job gains in June were in part-time jobs, up 264,000 (+8.0%) after a total loss of 132,000 in the previous two months. The overall level of part-time employment is essentially the same as in February 2020, before the COVID-19 pandemic. The month-on-month gain was driven by accommodation and food services and retail trade – two sectors where part-time workers account for above-average employment rates – and is concentrated among young people.

Profits were boosted by private sector employees, while self-employment declined.

In the public sector, employment increased by 43,000 (+1.1%) in June, bringing this to 180,000 (+4.6 percent) from pre-pandemic levels. Employment in this sector has trended upward after the initial wave of the pandemic, particularly due to the rise of health care and social assistance services, public administration and education.

To fully understand current and emerging labor market trends, it is essential to look at employment change in the context of population change, which totaled 1.1% (+334,000) since May. February 2020 to June 2021. To keep pace with this population growth and maintain a steady employment rate — that is, employment as a percentage of the population aged 15 years and over — employment will have to increase. 203,000 more. Instead, total employment in June was 340,000 people lower than in February 2020 and the employment rate was 1.7 percentage points lower (60.1% vs 61.8%). “

The number of Canadians working from home has dropped by nearly 400,000

Among Canadians who worked at least half their normal hours in June, the number of people working from home fell by nearly 400,000 to 4.7 million. For 2.6 million of these people, working from home represents an adaptation to the COVID-19 pandemic, as it is not their usual workplace. At the same time, the number of people working at locations other than home increased by about 700,000 to 12.3 million.

Nearly a third (31.4%) of workers aged 25 to 54 and more than a quarter (27.2%) of those 55 and older worked from home in June. Due to their concentration in industries where working from home is less feasible, such as accommodation and catering services, a much smaller proportion of 15-24 year olds (12.9%) ) did so.

Regionally, Ontario and Quebec lead higher, although BC and Nova Scotia also posted solid gains. Interestingly, even as restrictions were eased across most of the country, only five provinces reported job gains. 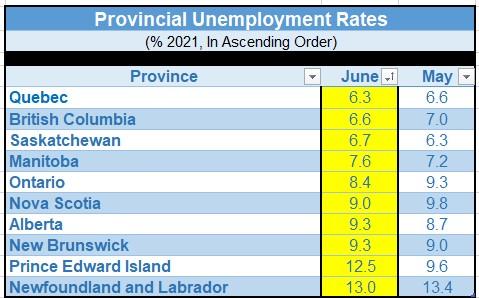 The jobs report is the last major piece of economic data ahead of next week’s Bank of Canada policy decision, which is expected to further back its stimulus efforts. The Bank of Canada was one of the first banks from advanced economies to switch to a less expansionary policy, having cut purchases of Canadian government bonds to $3 billion weekly from a peak of $5 billion last year. last.

Analysts expect the figure to drop to C$2 billion per week at the July 14 meeting before eventually falling to a weekly rate of around US$1 billion early next year. Aside from falling bonds, the market has had at least one rate hike this time next year.

The Canadian economy still has 340,000 jobs left at pre-pandemic levels. Unemployment was below 6% before the pandemic.

With vaccination rates rising and restrictions easing, economists are predicting a strong recovery in the second half of the year. According to a Bloomberg News survey of economists earlier this month, Canada’s expansion is said to be accelerating to a 9.1% annualized rate in the third quarter, with a 6% increase in three months. end of 2021. Consumer and business confidence in the outlook has recently hit a record high.

How ‘OpEx’ Is Shaking Up the Third Week of the Month

US Moves to Better Protect Infrastructure From Cyberthreats